To answer the question “Will Dogecoin Reach 1 Dollar?” we need to properly understand what is Dogecoin (DOGE) and how this virtual currency works. At the same time, we need to take into consideration which are the factors that could push Dogecoin higher and whether they could help Dogeocin reach $1.

What is Dogecoin (DOGE)?

If we want to answer the question “will Dogecoin reach 1 dollar?” we should know what Dogecoin is in the first place. Dogecoin is one of the oldest cryptocurrencies in the market. It was created in 2013 and aimed at offering the first meme token (or coin) in the market.

The coin was rapidly associated with the Shiba Inu meme dog on the internet. This dog was useful for sharing memes, jokes and more. This is why Dogecoin was considered not a digital asset that offered massively new solutions to the market, but a simple coin to share memes and bring a larger audience to the cryptocurrency market.

There are some differences between Dogecoin and other virtual currencies. Just to compare it, we will share with you the differences that it has with Bitcoin (BTC). This should help you answer the question “will Dogecoin reach 1 dollar?”

The first thing that we should take into consideration is the supply limit. As we might know, Bitcoin has a total supply of 21 million BTC. This is one of the main selling points of BTC, being digitally scarce. Instead, Dogecoin has no supply limit. This is definitely important to know the answer to “will Dogecoin reach 1 dollar?” If Dogecoin has an unlimited supply it might be somehow difficult for it to reach massively large prices as other digital assets do.

The number of coins increases by 5 billion per year. That makes it very difficult for DOGE to reach very large prices.

In terms of block times, Dogecoin has 1-minute blocks with a 1 MB limit and a Scrypt hash algorithm. The max transfer speed is 70 transactions per second when for Bitcoin it is just 7 transactions per second. In this case, DOGE is faster and cheaper to use than Bitcoin. Indeed, DOGE transfer fees are usually below $1 when compared to $20 per BTC transaction.

These are just some of the fundamentals related to Dogecoin and how this virtual currency compares to Bitcoin or other coins in the market. But will Dogecoin reach $1 dollar? This question is one that time should answer.

Dogecoin has been a very volatile virtual currency but also a coin that surprised many investors in the cryptocurrency market. At the time of writing, DOGE is the 6th largest in terms of market valuation. Indeed, Dogecoin has a market capitalization of $47.25 billion and a price per coin of $0.36.

DOGE is now one of the largest virtual currencies in the world due to the large exposure that it had to mainstream media, its adoption and a little bit of help from Elon Musk, the CEO of Tesla. However, one of the things we should mention about DOGE price is related to its volatility and some patterns.

This pattern is very clear when compared to the price of BTC. The trend repeated itself at least once per year or even twice per year in some cases. This shows that it could have been a very profitable strategy to trade these patterns that date back to the time in which the coin was released to the market. 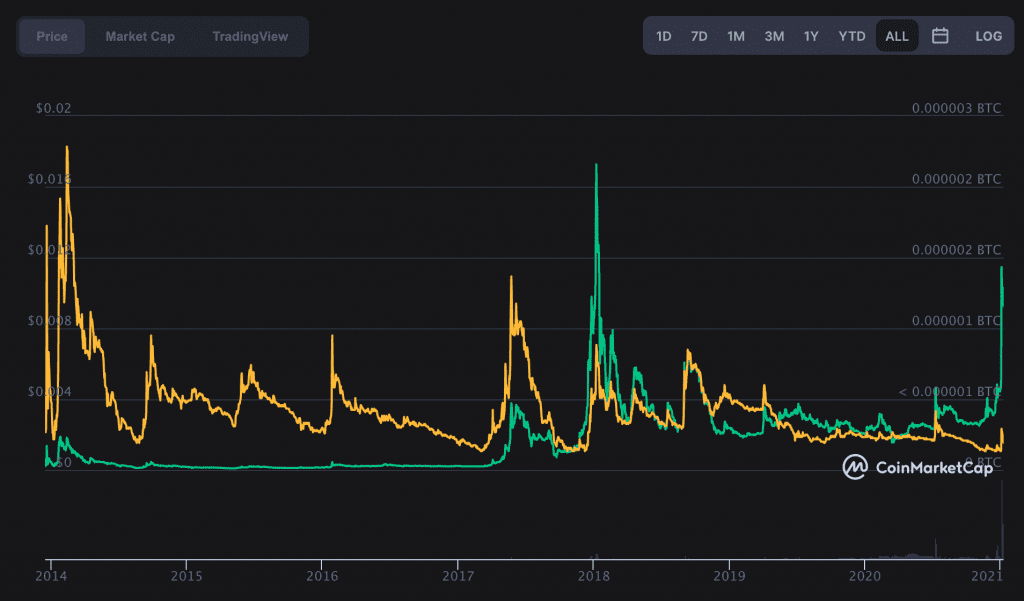 But “will Dogecoin reach 1 dollar?” This is something that we do not know and that we could not know with this pattern that we see in the charts. However, if the trend continues, this could eventually happen, if, for example, the price of BTC massively grows.

In USDT terms, the jumps in price are less noticeable but still could have been very useful to trade DOGE and make some profits. However, the trend has recently stopped. Indeed, DOGE broke all the limits and support and resistance level analyst could ever imagine. Indeed, nobody expected such an explosive price movement as the one that DOGE experienced a few months ago.

The price of DOGE moved from below $0.003 in December 2020 to over $0.71 in May 2021. This massive price surge has been related to different reasons, including Elon Musk’s tweets and also mainstream media attention.

“Will Dogecoin reach 1 dollar?” this is the main question of this article and the one that we will try answering. One thing is clear, everything is possible in the cryptocurrency market. However, we should also admit that nobody predicted what happened with DOGE in recent months.

Indeed, the recent situation in the market could only be explained by FOMO and how the market reacted to different stimulus, mostly from Elon Musk and also from other individuals in the crypto space.

But the answer to “Will Dogecoin reach 1 dollar?” is not clear. It could but it also could not happen. It depends on many different factors and which are the market conditions that appear. This is why we should always keep an eye open on how Dogecoin is moving and which are the catalysts that could push the price of the virtual currency not to its all-time high but even further, surpassing $1 per coin.

Additionally, in order for DOGE to continue moving higher, we should have a large number of buyers. This has already happened during the first bullish wave experienced by this virtual currency. However, getting a second large number of buyers might come a little bit more difficult in the future, specifically because DOGE is not a coin to hold but a coin that was usually for trading.

Whether Dogecoin will reach $1 dollar remains to be seen. It is highly possible that if the bull run continues and DOGE follows the trend it could surpass this price level. However, if the market starts a bear trend in the near future, then we might now see this happen (at least in the near future).

Elon Musk has had a lot of impact on the cryptocurrency market, but specifically on Dogecoin. The CEO of Tesla and entrepreneur has talked about Dogecoin not once but many times and it has even supported the expansion of the virtual currency.

Over the last months, he has been tweeting a lot about Dogecoin and almost each of its interventions ended up affecting Dogecoin’s price. For example, back in December 2020, Musk tweeted:

This has then attracted more than 11k comments and more than 221.9 likes. DOGE has then soared by over 20% and it started one of the largest bull runs in history. At that time, the “send it to $1” campaign was something DOGE holders were already pushing for.

At the same time, he changed his biography on Twitter to “Former CEO of Dogecoin,” making reference to the time in which he wrote for just a few hours that he was the CEO of this virtual currency. All these details make it possible for Dogecoin to move higher and for investors to make a fast profit if they are able to enter the market as soon as Musk positively comments about DOGE.

These comments were just the catalyst to the bull run that DOGE had when it moved towards its all-time high close to $0.70. The trend continues even now. If Musk comments something about Dogecoin (positive) then you should expect the price to move higher. Whether it will reach $1 remains to be seen.

The truth is that there are few projects on the Dogecoin network. It is indeed one of the reasons why analysts do not see good fundamentals behind this virtual currency besides Elon Musk’s comments.

However, there is one project that could eventually change the way in which we think about Dogecoin. This project is the Flare Network, a new decentralized finance (DeFi) project that aims at integrating XPR, DOGE and Litecoin (LTC) to the list of coins running on this network. 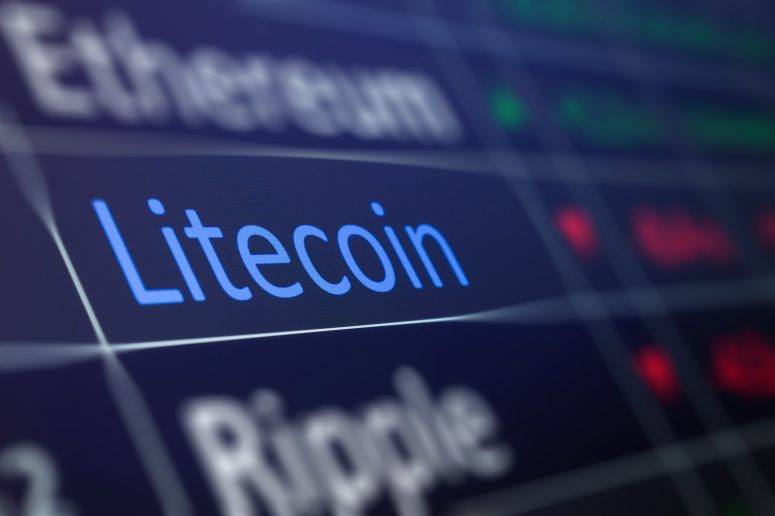 Although there are no details about how DOGE will be integrated into this network, this is one of the projects that has decided to offer DOGE a new use case that it didn’t have. This is indeed a positive thing in terms of DOGE adoption. The fast transactions and low fees could be very useful to interact with smart contracts and DeFi protocols.

Thus, this project could be very positive for DOGE. Indeed, the possibilities for Dogecoin are endless on this platform. However, this would highly depend on the expansion of the Flare Network and its market penetration. There are many competitors out there that have already launched new solutions to compete against Etheruem (ETH).

Knowing that Dogecoin is already being implemented on the Flare Network is positive. It would be interesting to see how DOGE would behave once the virtual currency gets added to this network and whether this would have a positive impact on the price of DOGE. Despite that, we can be sure that this could be just one more reason for individuals to get access to this virtual currency.

“Will Dogecoin reach 1 dollar?” Well, we need to know which are the benefits of DOGE and whether it is possible for it to expand its use cases in the future. There are already some benefits of Dogecoin that are related to its design.

The more users sending and receiving payments in DOGE make it more valuable and also demanded. The benefits are larger for those users that cannot pay high fees for different reasons. Moreover, if we want to buy goods or services with DOGE, we would be able to do so almost instantly.

Another thing that we should take into consideration is related to the fact that the Dogecoin community gathered funds to send the Jamaican Bobsled Team to the Sochi Winter Olympics.

There are, however, some disadvantages of using Dogecoin. “Will Dogecoin reach 1 dollar?” Well, thos disadvantages could be simply some challenges that the community would have to face if they want DOGE to reach $1 in the future.

One of the things they should address (sometimes this is not even possible) is the volatility that this virtual currency has. The price is very volatile, and it is sometimes more volatile than other virtual currencies. For those investors that believe in the long term, having these price fluctuations might not be a good thing.

Another thing that is affecting the project in the long term is related to the lack of supply limit for Dogecoin. The digital currency gets printed on a yearly basis by around 5 billion units. This is certainly massive compared to the number of people that are ready to buy the virtual currency.

At this pace, and during periods of bear trends, the price of DOGE could definitely be negatively affected. Thus, the community and developers should find a way to reduce its total supply or to at least create some sort of cap for DOGE. Nonetheless, this is not yet one of the discussions that the community is currently having and it might take some time before talks start on that matter.

How to Buy Dogecoin in India

How to Buy Dogecoin in India
Dogecoin

How to Buy Dogecoin in UK

How to Buy Dogecoin in UK
Dogecoin

How to Buy Dogecoin in Australia

How to Buy Dogecoin in Australia
Dogecoin

How to Buy Dogecoin in Singapore

How to Buy Dogecoin in Singapore
Dogecoin

How to Buy Dogecoin with Bitcoin

How to Buy Dogecoin with Bitcoin
Dogecoin

Which Cryptocurrency Has the Fastest Transaction Time?
14-06-2021
Dogecoin